OFPD, Orland Park, IL., – Four civilians were honored Tuesday by the Orland Fire Protection District Board for quick action that helped save the life on May 29 at Lake Sedgewick of a 33 year old man who officials said would “surely have drowned.”

Albert Kulicz, 21, of Bridgeview, and a friend, McKenzie Smith, 16, jumped into the water when the man started yelling for help. Friends on shore quickly called 911 for emergency assistance.

Three of Smith’s friends, also students from Carl Sandburg High school in Orland Park, Andrea Dunn, 16, and Taylor Calzaretta, 17, and Meghan Carmody, helped as Kulicz and Smith dragged the naked man from the waters onto the shore.

“All of these young men and women went above and beyond to help a person in need. Not only did they call 911, as they should, but they also immediately helped by giving the victim resuscitation support,” said OFPD Fire Chief Ken Brucki in presenting the recipients with the OFPD Citizens Life Saving Award.

“We want to thank each and every one of you for what you did. It was brave and you all did a good job.”

Four of the five rescuers were introduced to the board by OFPD Lt. Mark Duke, who said that they had acted properly and professionally, “And they did what needed to be done without any special skills or training.”

Smith was unable to attend the presentation at the Fire Board meeting but Kulicz, Dunn, Calzaretta and Carmody were all presented with Life Saving Certificates.

“It is heartwarming to know that there are individuals out there who will come to the assistance of people who are in need and in dangerous circumstances,” said OFPD Board President Jim Hickey. 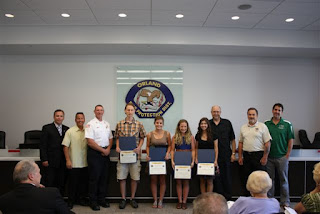