The Orland Fire Protection District Board of Trustees and Fire Chief Ken Brucki recognized firefighters for length of service and residents for acts of courage at its meeting Tuesday, August 27, 2013.

Patrick Collier was recognizer for 15 years of service at the Orland Fire Protection District. 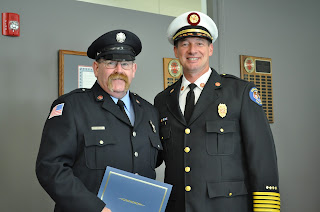 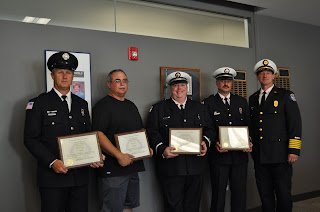 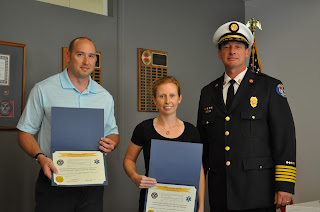 Sarah and Brian were having lunch at a restaurant when they saw a 16 year old experiencing cardiac arrest.

Lt. Mark Duke who presented the Awards with Fire Chief Ken Brucki said, “Sarah and Brian began CPR for several minutes until the ambulance arrived and their actions resulted in the successful resuscitation of the cardiac arrest victim.”

Chief Brucki noted, “One of things we pride ourselves in the district is our response time. The response time in this incident was less than 3 minutes. But still valuable time is lost and the assistance of these citizens in helping with CPR makes it more likely that a cardiac arrest victim will survive. This is another example of how this makes a difference. Their training in CPR has contributed to the survivability of the 16 year old boy.”

Seven citizens were recognized for their efforts to help save the life of a 3-year-old who almost drowned at the Orland Centennial Pool in August. They are lifeguard Patrick Melaniphy, Pool Patron Dave Bornstein, Team Leader Lucas Fritsch, Lifeguard Rebecca Mallon, Squad Leader Christie Demas and Assistant Manager Will Seidelmann. 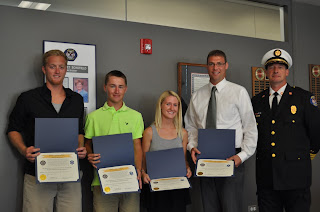 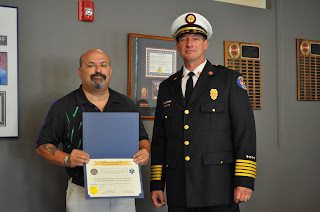 Brucki said, “Those first few minutes mean everything and contribute to the survival of the individuals involved.”

Officials of the Village of Orland Park, including Trustee Patricia Gira, attended the board meeting to show support for the award presentations.

The Orland Fire Protection District will officially commemorate the Firefighter Remembrance Memorial on Saturday Sept. 14 at 8 am at the northeast corner of the OFPD Administration Building, 9790 W. 151st Street.

OFPD Engineer Ray Marquardt, whose father Lt. Raymond Marquardt  passed away on Sept. 14, 2009 as a result of a line-of-duty related illness, will participate in the memorial service joining Fire Chief Ken Brucki, and members of the OFPD Board of Trustees.

Attached is a flyer detailing the event information.

The memorial was constructed by Eagle Scout Candidate Kyle LaHucik, a member of Boy Scout Troop 725 in Mokena. The project took two years to plan