Officials of the Orland Fire Protection District provided a hands-on training session for the administrators and the staff of the Bridge Teen Center Monday in using the AED, Automated External Defibrillator which can increase the chances of survival for victims of heart related emergencies.

The Foundation donated the AED to the Bridge Teen Center at 15555 S. 71st Court, a place where teens and young people gather to enjoy a wide range of after-school and summer programs.

CPR (Cardiopulmonary Resuscitation) training was provided by two retired members of the Orland Fire Protection District, Lt. Chris Smith and Engineer Robert Palermo, who offered hands on instructions on the proper way to administer CPR and proper use of an AED.

“The AED is very easy to use,” Smith explained noting that once you know how to apply the device, the device offers instructions on what steps need to be taken in emergency situations. 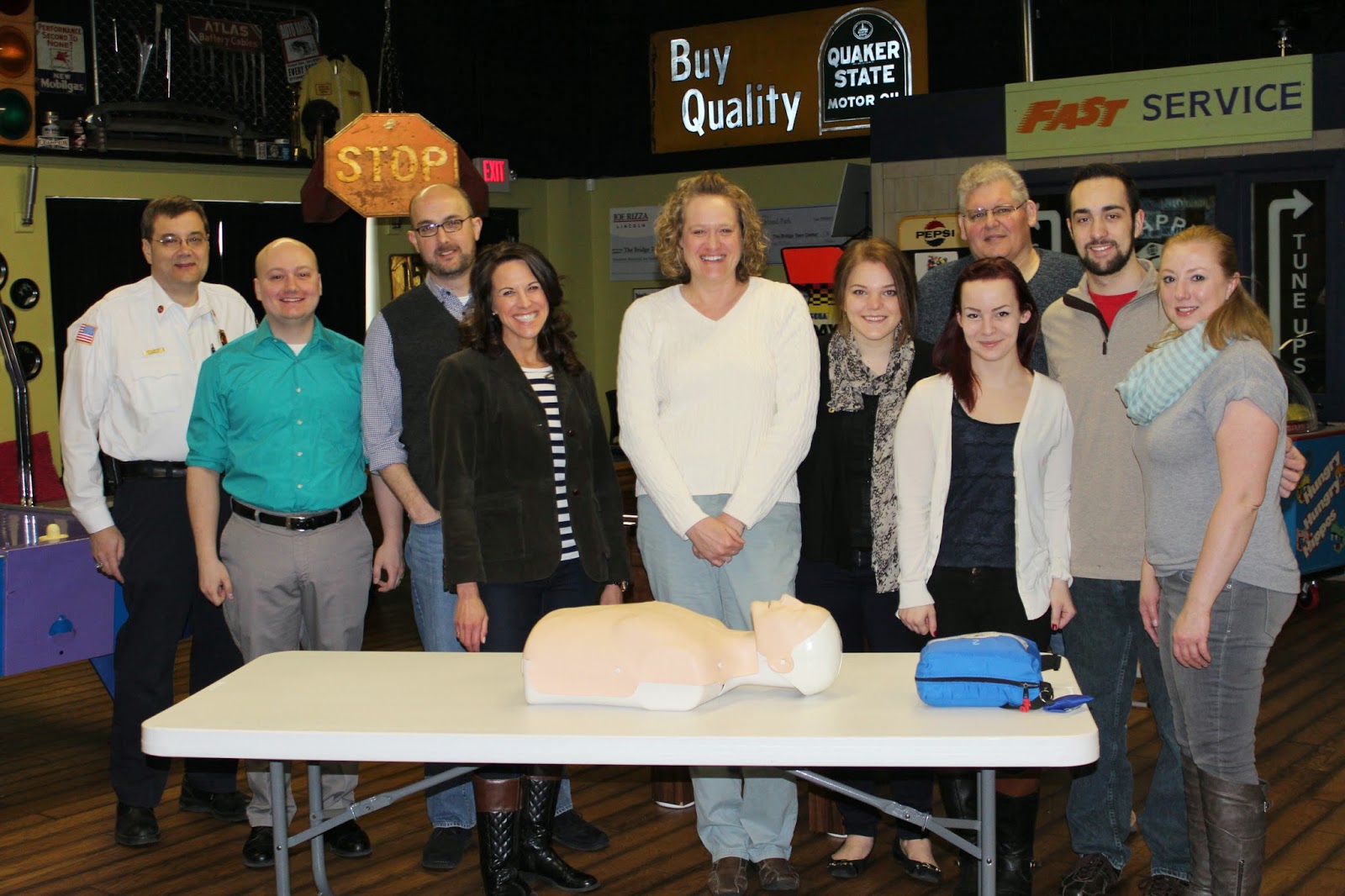 “Statistics have shown that if you can shock an adult patient in the first minute of cardiac arrest, when there is no breathing and no heart beat, there is over a 90 percent chance of saving them. After 5 minutes it drops 50 percent. And it drops 5 to 7 percent for every minute after that. AEDs can save lives.”

Smith said that giving a patient those extra few minutes while an ambulance is arriving to respond to the emergency can make the difference between life and death. AEDs are portable electronic devices that diagnose life threatening cardiac arrhythmia and ventricular tachycardia in patients. Once diagnosed, the device assists in treating the victim through electrical impulses that stimulate the heart, allowing the heart to reestablish its own rhythm.

The Orland Fire Protection District is expanding its “Community CARE” program to provide CPR and emergency training to the staff of businesses and organizations throughout the district.

Community CARE encourages businesses to purchase an AED, or Automatic External Defibrillator, which fire officials said can increases the likelihood of survival for victims experiencing a heart attack or other heart related emergencies. 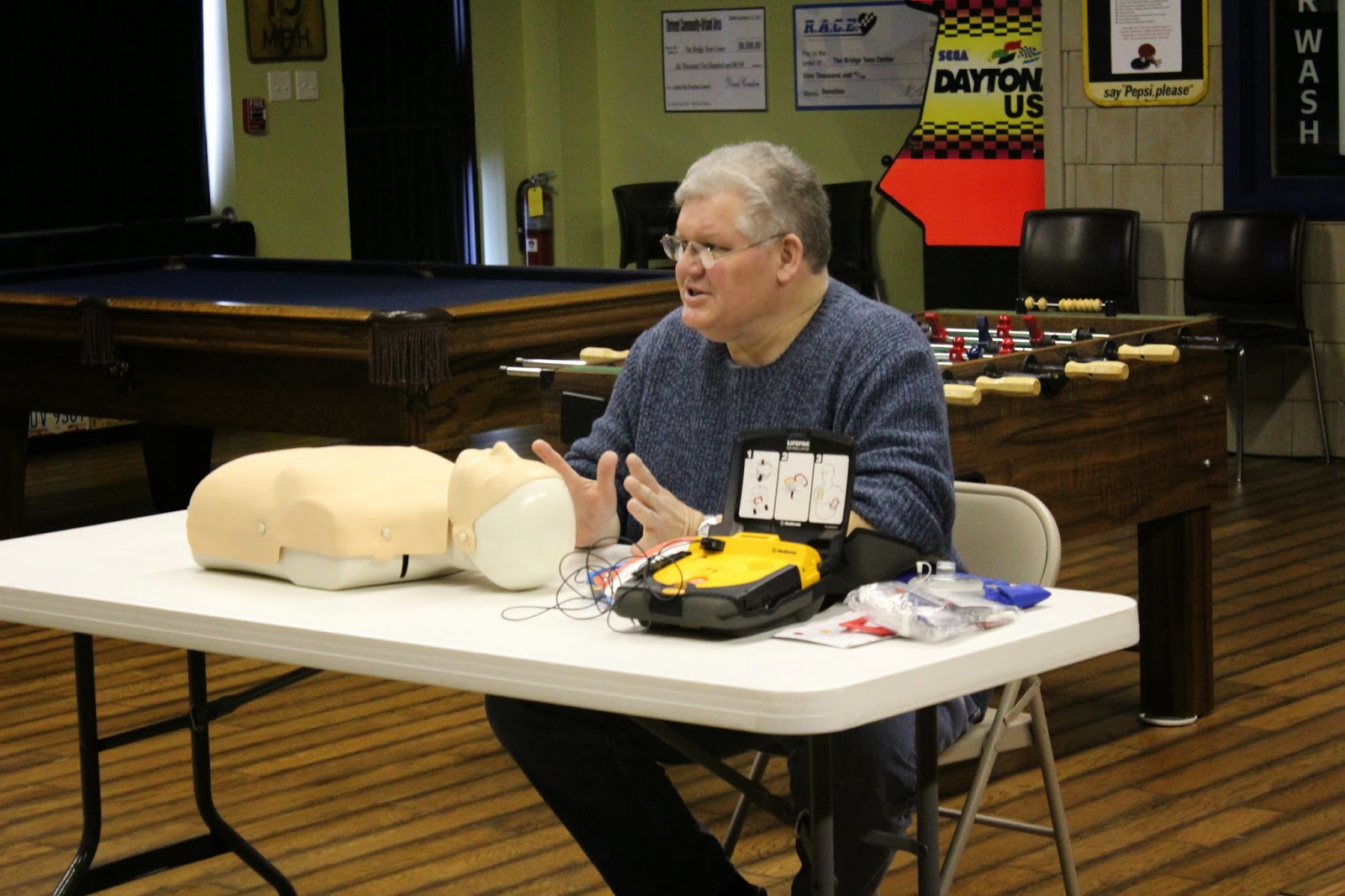 The Orland Fire Protection District Community CARE Program is dedicated to the proposition that, when it comes down to those precious minutes following sudden cardiac arrest, planning saves lives.

The program’s primary mission is two-fold: to increase the number of people trained in CPR and the use of an AED and to increase the availability of public access to Defibrillators (PADs). Furthermore, the program aims to create a monitoring / maintenance program ensuring CPR skills remain current and defibrillator batteries and pads remain operational.

Community CARE is modeled from a successful Seattle Washington program, boasting a near 50% survival rate in reducing fatalities from cardiac arrest for over three decades.

The cost of AED devices range between $800 to $3,000, officials said. Currently, AEDs are located at many schools and businesses in Orland Park. Officials said every school has an AED with trained staff. Last month, OFPD officials offered training to staff and employees at Mercedes Benz of Orland Park, which has two AED devices.

On January 2, 2014 paramedics responded to an individual with difficulty breathing at an extended care facility. On arrival, they determined the patient,  a 90 year old woman to be in cardiac arrest. They initiated high performance CPR and the patient was defibrillated and given medications. The patient was taken to the hospital with her blood pressure and pulse stabalized. 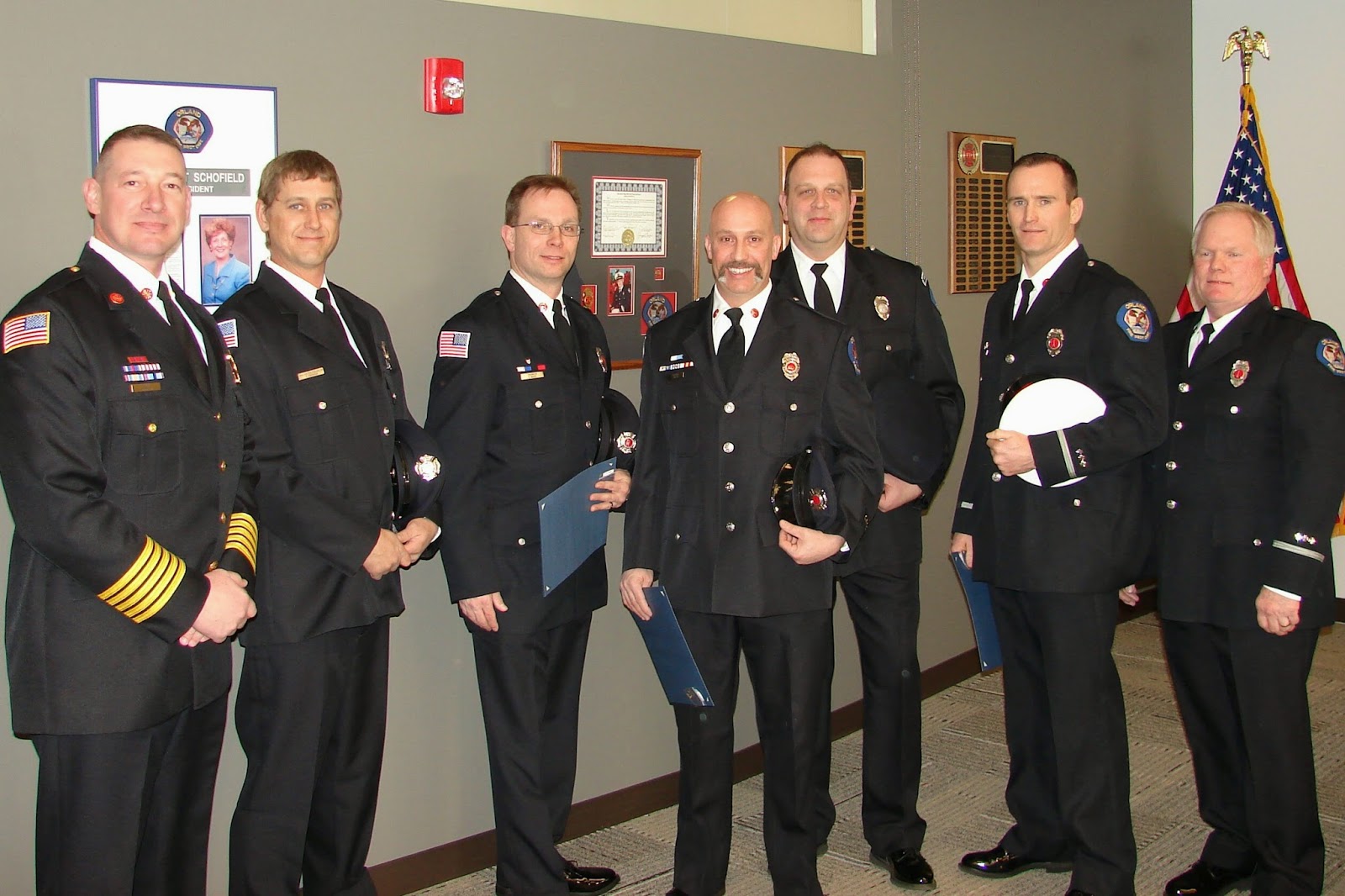 On Jan. 31, 2014, paramedics responded to a cardiac arrest call at an extended care facility. They initiated high performance CPR on the patient, an 81 year old male and they identified an obstructed airway. The obstruction was removed and after 20 minutes of resuscitation, the patient regained a pulse and blood pressure. Induced hypothermia was initiated according to standing medical orders and the patient was taken to the hospital where the patient resumed treatment and care.

On March 2, 2014, paramedics responded at a residence for an unresponsive 58 year old male. The patient was determined to be in cardiac arrest and high performance CPR was initiated. The patient was defibrillated several times after which he regained a strong pulse, blood pressure and spontaneous respirations. The patient was taken to the local hospital where he continued his treatment. 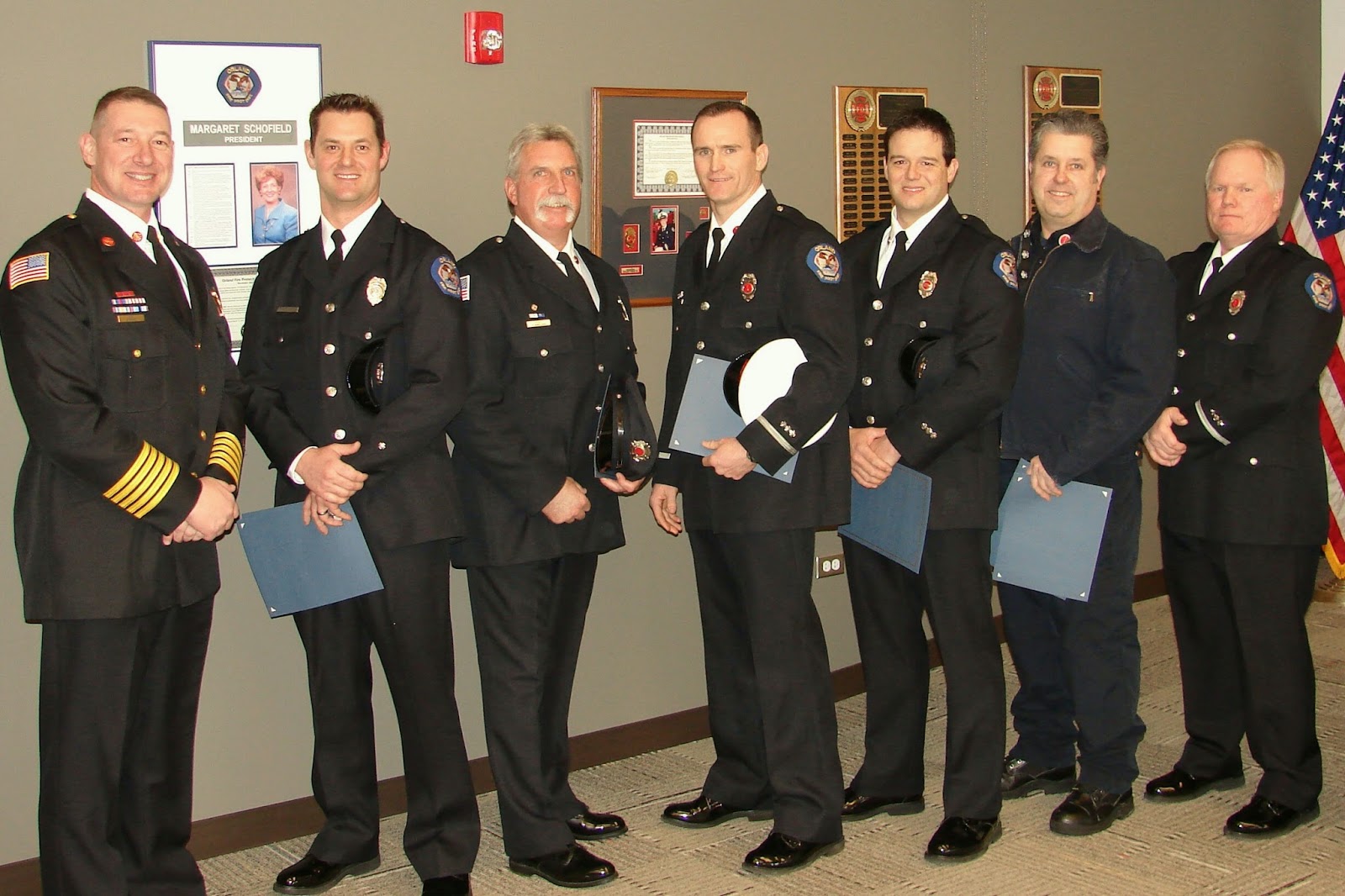 Fire Chief Ken Brucki said that a fourth fifer on March 12 at a home in Orland Park at 145th Street was particularly challenging because the home had a 300 foot “set-back” from the street.

“It was a very cold day and we had to stretch the hoses further. But we were fortunate that a neighbor had cleared the very high piles of snow from the fire hydrants nearby,” Brucki recalled.

“Our battalion chiefs and firefighters are always ready. We have four BC’s at the scene to lend a hand. They had heard the calls and came out to assist. It helped. I also personally went to the home of the neighbor to shake his hand and tell him how much his efforts to keep the fire hydrant cleared helped us to fight the fire at the home. The snow around it was several feet higher than the top of the hydrant so having it cleared meant the response was faster and effective.”

Brucki also said that the Fire Department would hire 10 more firefighters who are also paramedics immediately to replace 10 veteran firemen who are retired or leaving because of “normal attrition.” The proposal to hire the 10 firefighters to fill the vacancies was approved by the full board. 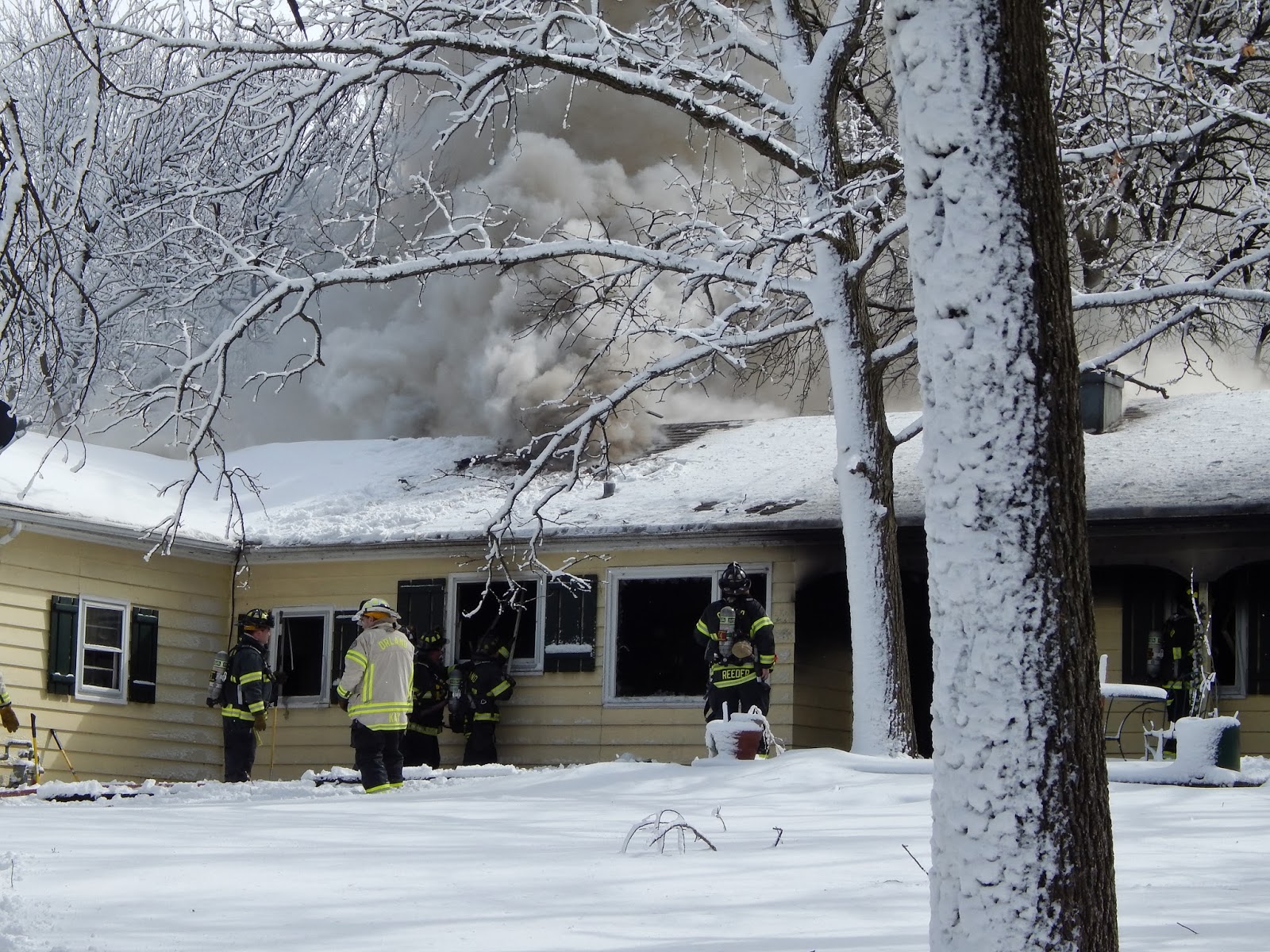 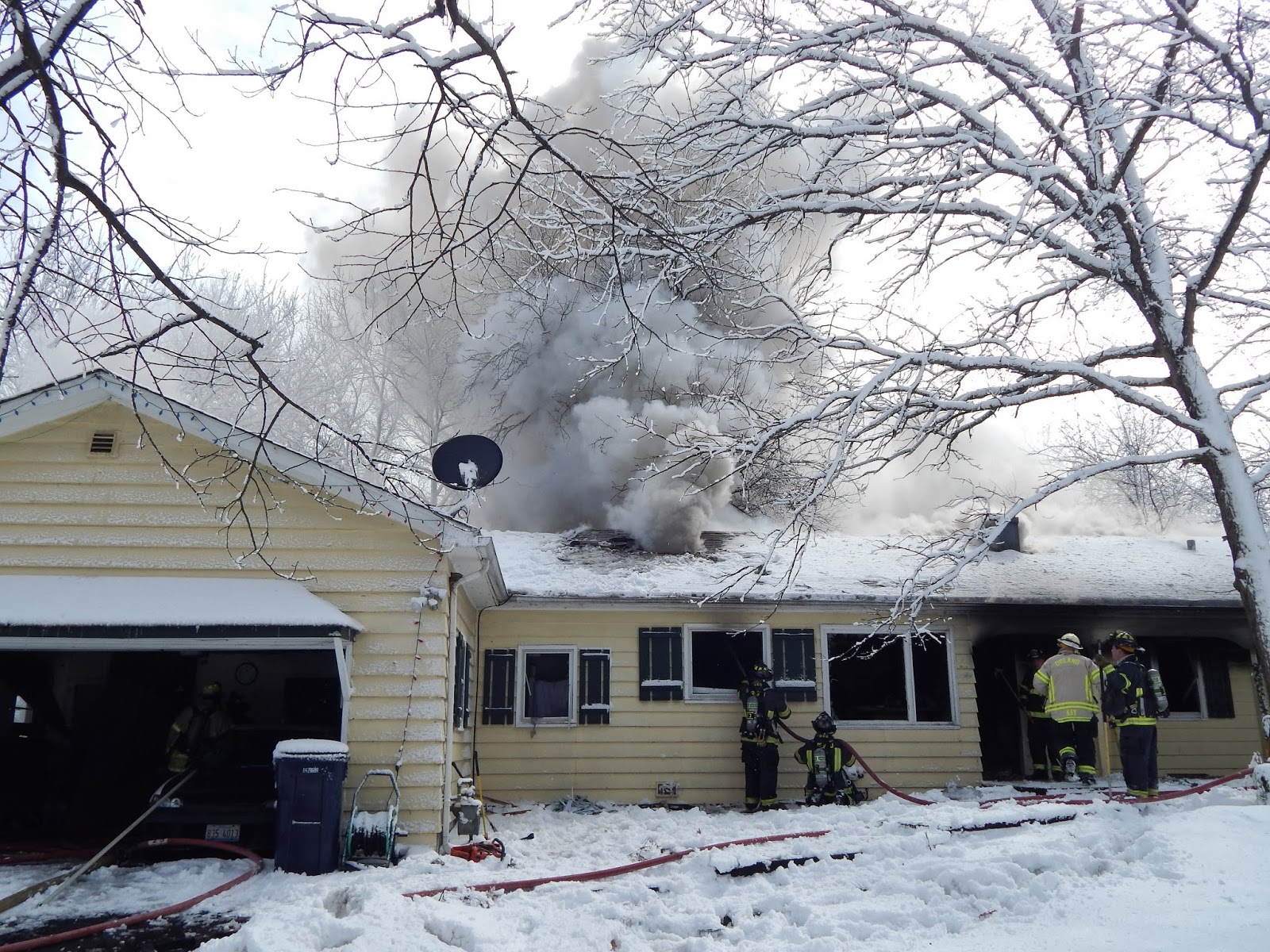 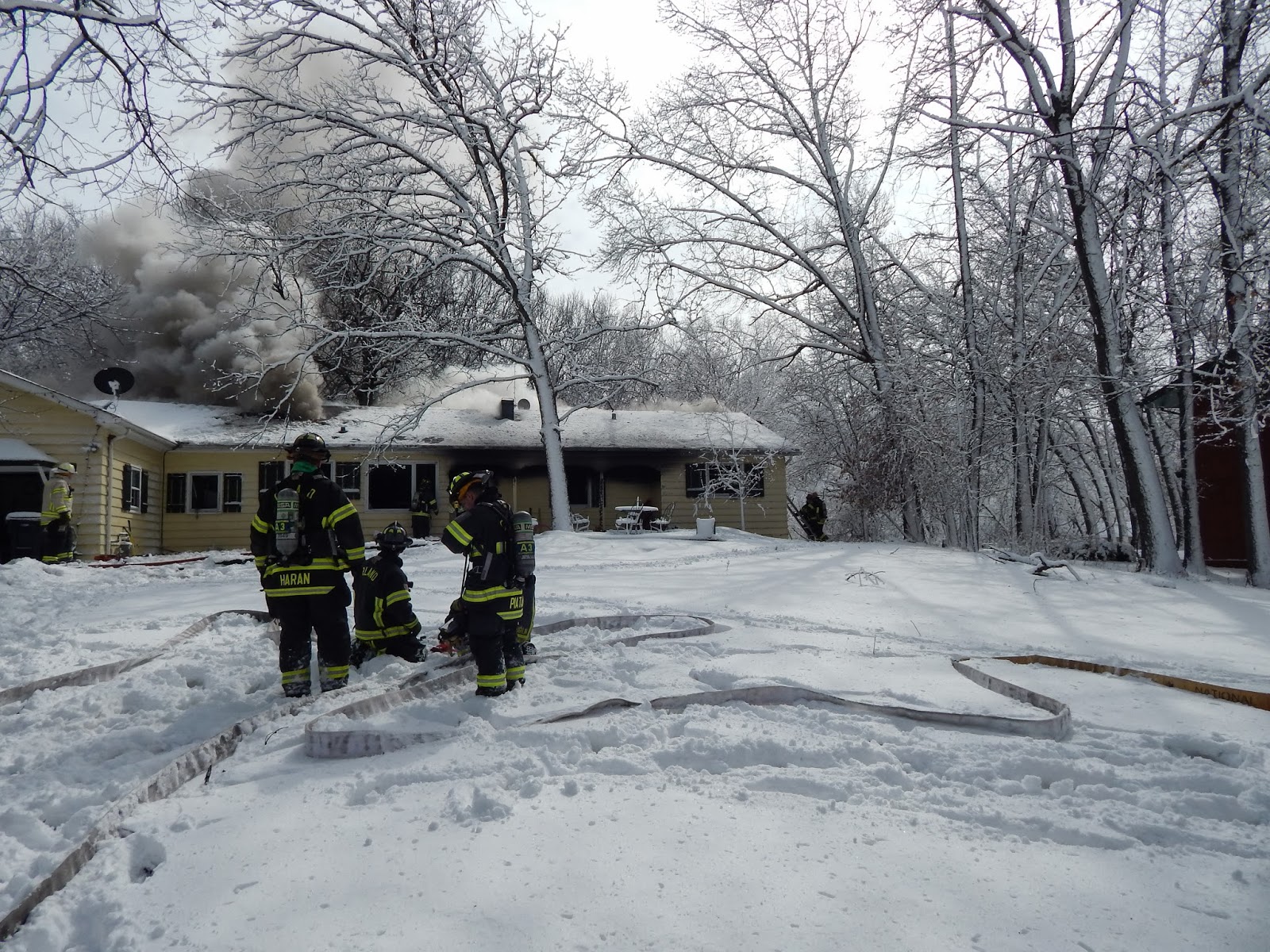