The home owner arrived home to find the house filled with smoke. Orland Fire dispatched a structure fire response of 2 engines, 2 trucks, 1 ambulance, and 2 chiefs. Engine 6 arrived on the scene within five minutes from the time of dispatch and reported smoke on the outside and fire in the kitchen area upon entry. Crews reported heavy smoke inside and high heat on the second floor. Battalion 3 upgraded to a working fire response bringing an additional engine, ambulance, chief, and safety officer from Orland to the scene. Additional units arrived and assisted with extinguishing the fire and searching for people and pets.

No people were in the home and two dogs and a cat were removed safely.

Due to the rapid response and the number of personnel on the initially dispatched units arriving within 8 minutes, the fire damage was contained to the kitchen area with smoke damage throughout the home. Prior to the fire being noticed, it had burned through structural floor supporting the second story which was noted by initial crews and relayed to all on scene to prevent a firefighter from falling through. Smoke detectors were activated throughout the home which would have alerted the occupants if they were at home. Water damage to the home was limited due to the use of CAFS (compressed air foam system) hose line which uses considerably less water to extinguish fire.

The OFPD responded with 25 personnel to this incident. Orland Fire had an engine and 3 ambulances available in the District for other incidents but also called Mokena Fire for an engine to provide coverage on the West side of town.

There were no injuries at this fire and the cause of the fire is under investigation.

The fire occurred in the mid-afternoon on Thursday. 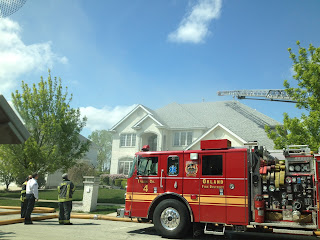 Photo courtesy of the OFPD