On April 13, 2012 the Orland Fire Protection District responded to a structure fire in the 11200 block of 159th Street at 11:01 am. Initial arriving companies encountered heavy fire conditions in an abandoned house. This house was known to be abandoned with dangerous structural conditions inside.

A defensive fire attack was initiated meaning multiple hose lines were deployed on the outside of the house only. Fire extinguishment took place while protecting the safety of the firefighters. Smoke conditions and embers were monitored protecting any nearby structures from the spread of the fire.

Traffic was controlled by Orland Park Police (OPPD) on 159th Street as hose that supplied the fire apparatus were deployed crossing the street. This fire is an example of the close working cooperation with the OPPD.

The fire was extinguished by 12:30 pm. No injuries were reported. The fire is under investigation.

Acting Fire Chief Raymond Kay said he is always concerned about abandoned buildings for the safety of the public and responders when firefighters are called to these buildings.

"Through a pre-plan process, we knew that the building that burned today was dangerous. It have been abandoned for several years and the building was deteriorating. As firefighters, we will risk a lot to save a lot. It does not make sense to take extra risk on a dangerous building," Kay said.

"We are careful to place firefighters outside of collapse zones and use equipment like our tower ladder truck to extinguish the fire more remotely. Safety is very important. Our firefighters responded today appropriately, extinguished the fire and remained safe. I appreciate the close cooperation and coordination working with the Orland Park Police in controlling traffic on a 159th Street." 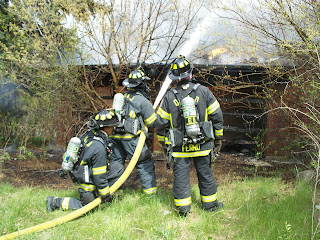 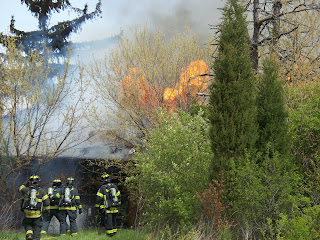 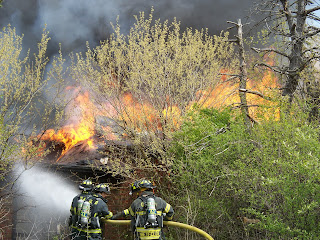 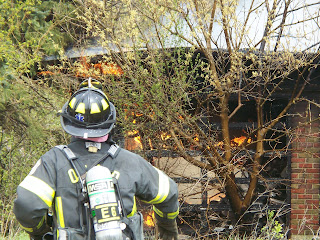 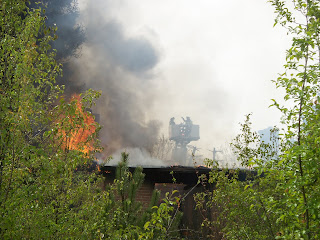 Pictures courtesy of OFPD Inspector Nancy Mulvihill
Posted by Ray Hanania at 10:18 AM