The CERT training class was led by Lt. William Leddin and the final session was held Wednesday at the district’s training center at 10728 W. 163rd Place. It will be followed by another class that will opened to public enrollment this Fall.

“We have seen many instances where the fast action of people who have emergency response training can make a difference in saving lives, like the most recent incident in which a boy almost drowned but was saved by a party-goer who was at the pool party who had emergency training,” Chief Schofield said.

“This first CERT class was a pilot program and I think it went very well."

Schofield was referring to the emergency call received on July 16 in Orland Park when a young boy was rescued from drowning by an off-duty Chicago Police officer, Cindy Guerra. Guerra was presented with the District’s William Bonnar Life Saving Award at a ceremony July 26 for saving the boy’s life.

Leddin said that the training provided during the CERT pilot program this week included CPR, extinguishing small fires and the proper and effective use of fire extinguishers, helping individuals who may have a wide range of injuries including heart attacks and injuries, and effective responses to severe weather crisis including tornadoes. “We hope that in the next emergency 9-1-1 call, and we dispatch our emergency team to respond, they will find that someone will be on scene with the victim offering emergency assistance,” Leddin said.

“Those first few seconds of an emergency can made a significant difference in saving someone’s life. The sooner emergency response is started, the better the chances someone in an emergency situation will survive.”

The 10-week pilot program consisted mostly of members from the District’s Senior Advisory Council (SAC) along with a few senior volunteers.  All volunteers who completed the course and passed the final exam will receive their certificates of completion at the next OFPD Board of Trustees meeting on Tuesday, August 23 at 5:00 p.m.

The district is planning to offer a new class for all district residents 18 and older sometime this fall.   For more information on the CERT Program, visit the Orland Fire Protection District website at www.OrlandFire.org. Understanding the proper use of a fire extinguisher is critical in responding to a small house fire. 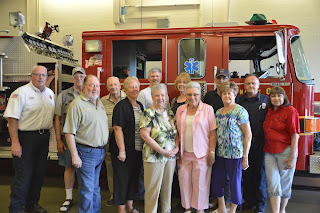