Lightning suspected, officials said. The family was on vacation

The Orland Fire Protection District responded to a fire reported in a home located on the 108th block of West Scarlet Drive in Orland Park early Wednesday morning. 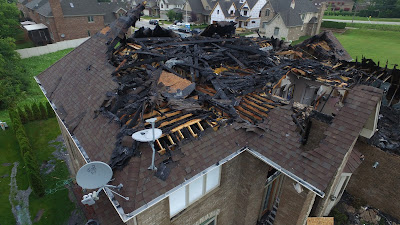 The fire was reported at about 2:46 am on Wednesday July 29, 2015 and initial arriving fire companies found heavy fire had spread through the attic and roof areas of the 5,000 square foot residential home. Firefighters reported that heat radiating from the blaze was extensive.

OFPD Chief Ken Brucki said that firefighters immediately went into a defensive position to get the fire under control preventing any injuries.

“This fire had a tremendous amount of heat and it concerned us,” Brucki said. “We were concerned about structures around the property and took appropriate precautions to keep nearby properties safe.”

Brucki said the cause of the fire is under investigation.

“Crews were able to conduct a rapid primary search to confirm there were no occupants in the property at the time, and we were able to verify that the family was vacationing,” Brucki said.

The alarm was elevated to a full still to bring in additional companies.  A total of two aerial master streams and five large diameter hand-lines were required to extinguish the fire.

It took approximately an hour to bring the fire under control.

Brucki said one possible cause of the fire may be lightning noting “there was a tremendous amount of lightning in the area at approximately the same time of the fire.”

Brucki also said that the fire department was able to deploy a drone to assist in quickly identifying the fire location on the home.

“It was a very large home and the drone helped give us an immediate, aerial view of the property and the fire,” Brucki said.  “The aerial view assisted the Battalion Chief to direct suppression efforts to bring the fire under control.” 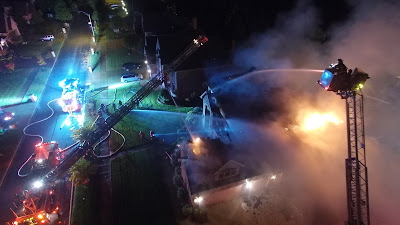 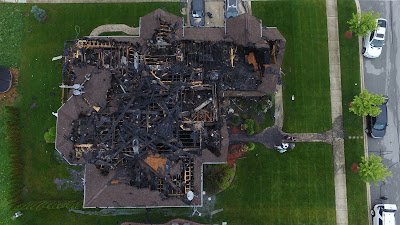 The Orland Fire Protection District’s Fire & Life Safety Camp was held Tuesday, July 13th through Friday, July 17th, and was a huge hit again this year! Public Education Coordinator Elizabeth (“Betsy”) Dine wants to thank everyone who came out to speak and to help at our camp this year. It would not be as successful without all the volunteers who give of their time to make it a great experience for the kids and Betsy would like to thank each and every one of her volunteers. Each camp day schedule was a mix of fun fire and life safety lessons. On Tuesday (July 14-17, 2015), the camp kicked off with Fire Chief Ken Brucki welcoming the campers. Next the campers watched our very own firefighters perform a live fire response demo. It’s always very exciting for them and they are able to ask questions afterwards. Next, they learned about CPR and First Aid with many hands-on activities. After that a representative from Advocate Children’s Hospital gave them a lesson in injury prevention, which included poison prevention and the Berry Unsafe House.
Wednesday we had some very special guests drop by the camp to surprise the kids. Denver Broncos football player Michael Schofield, and his friend Kendall Coyne, who won a Silver medal in the 2013 Olympics playing for the US Women’s Hockey Team, stopped by to speak to the campers about their individual journeys to becoming the athletes they are today and the dedication and commitment it takes to be the best they can be and never giving up on your dreams. They both autographed the kids’ camp shirts. Bear Paddle Swim School came out and helped our Dive Team instructor teach the children about water safety with live demonstrations in the pool. The children also learned about safe bike riding and went home with their own helmet fitted specifically for them by the team from Advocate Children’s Hospital. Some of the firefighters helped the children tour our fire and life safety trailer, teaching the children about kitchen and bedroom fire safety, and learned about EDITH (Exit Drills in the Home). A lesson on pet safety was given by Lutheran Church Charities K-9 Comfort Dogs. The handlers brought these beautiful sweet golden retrievers to demonstrate the importance of taking care of your pets in a safe and loving way. Our very own Fire Dog Sparky made an appearance as well, to visit with the children and taught them some new dance moves.
Thursday was a rainy day and we spent most the days indoors listening to various speakers. First up was Papa Choo Choo (Gordon Bowe) from Operation Lifesaver/Union Pacific Railroad. He did a great job informing the children why to stay off railroad tracks and how to be safe when crossing tracks and showed them a great movie. Next a nutritionist spoke to the campers about the importance of healthy eating and developing good eating habits. Lastly, Author Nancy Flowers spoke to the children about a very important topic, BULLYING. She gave them great pointers on how not to be a bully and what to do if they are being bullied.
Our last day, Friday was a fun-filled day. First a police officer spoke to the children about stranger danger and how there are good and bad strangers. She gave them instruction on reacting in different situations. Also, an Officer from the Cook County Sherriff’s Department SWAT Team showed the children the vehicle they use and some
of their equipment. The kids were able to try on the different gear and had a great time in the Show & Tell exercises. The last part of the day the children got to go to various stations—one being the Firefighter Challenge where they got to shoot a real fire hose using water and a house to put the fake flames out. They had a lot of fun getting wet. The next station was the Combat Challenge which represents a firefighter in action. The campers climbed through windows and went through obstacles, crawling under pretend smoke and up and around to safe ground. They competed boys vs. girls and were timed. The very last station was a Wheel of Wisdom where they competed against each other about how much they learned throughout the week by being given questions they had to buzz in quickly on and answer correctly.
Graduation came way too quickly as the parents came to see the campers get their camp diplomas. Fire Chief Brucki quizzed them on all they learned and they were very quick to raise their hands to answer the questions, and were very excited to do so.