FOR IMMEDIATE RELEASE                                                                            Ray Hanania
Wednesday March 28, 2012                                                        rayhanania@comcast.net
Orland Fire Official Presidents says district has more cuts to make
Orland Fire Protection District President James Hickey said that the board faces a decision to reduce spending by cutting equipment or by raising taxes, but said he opposes proposals raised by members of the public suggesting one of the district’s six ambulances be eliminated.
Hickey said the options that have been discussed including cutting of one the district’s six Ambulances, one of the district’s engines, laying off employees or raising taxes at Tuesday’s board meeting.
During the meeting, Orland Park Village Trustee Pat Gira said she opposed trimming an ambulance but offered no solutions to the district’s problems. Hickey responded later that the Village should consider taking over the Fire Prevention department’s 5 employees since revenues collected from tickets issued by that division go to the Village.
But Hickey said that he opposes cutting back an ambulance but might recommend that the choice be put to voters on a referendum.
“I don’t want to cut any service but we have to either cut a truck, an ambulance, fire prevention, or even raise taxes to cover our expenses,” Hickey said after the meeting.
“If we have to do something, I would rather trade a truck for an ambulance. The biggest service the Orland Fire Protection District provides is ambulance and life support services to our residents.”
Hickey said that am ambulance costs about $1 million and with 25,000 households, it would mean a tax increase of $40 per year.
“The challenge we have is that about 90 percent of the costs of fire service are for wages and salaries and that is locked in with the unions right now. We are going to begin negotiations with the unions and they understand our situation. Mandated pay raises last year cost the taxpayers about $600,000 for 110 union employees,” Hickey said.
“We had two people who came to the board saying they didn’t want to cut an ambulance, including Trustee Gira. But I wonder what they would support doing as opposed to increasing property taxes. The issue is how do we cut back costs rather than increase taxes in order to continue with our mission which is to save lives? An ambulance saves more lives.”
On other issues, Hickey said that he expects the board to have the names of five finalists for the position of permanent Fire Chief and select a permanent chief sometime in May. Hickey said the board has received more than 40 resumes including from Acting Fire Chief Raymond Kay, the only member of the Orland Fire Prevention District to apply in the public call.
“We did receive resumes from firefighters who live in Orland Park but who work elsewhere. We even had one resume from a candidate who thought he was applying to be the chief of Orlando, Florida. He kept asking, why did he have to fly to O’Hare for an interview? Needless to say, he’s not on our list,” Hickey said.
“There are a lot of very qualified candidates, including Chief Kay. Chief Kay’s resume is phenomenal and he has done a great job stepping up to the plate to fill the vacancy created when Chief Bryant Krizik departed.
Hickey also said that the Fire District is again looking for applicants for the Summer Internship Program.
“They must be at least 16 years of age. This is a good program to instill a love and appreciation for the Fire District in our young people,” Hickey said.
Hickey said that he expects to hire all of the Intern applicants as he did last year.
“We have a certain number of hours and we want to give everyone a chance to learn and benefit the Fire District,” Hickey said.
end
Posted by Ray Hanania at 8:30 PM

Orland Fire Protection District Responds to Prairie Fire
The Orland Fire Protection District issued a Brush Fire Box call today at 1:30 to battle a fire located in a prairie near home on 151st Street between Wolf and Will Cook Roads today.
The cause of the fire was not identified but firefighters from the Orland Fire Protection District received support from five nearby fire districts to battle the prairie fire which threatened as many as a dozen homes.
Acting OFPD Fire Chief Raymond Kay said that there was a concern for many of the homes nearby because of floating embers that spread through the region during the fire which lasted about two hours before it was extinguished.
“We were very concerned about the safety of the nearby homes. That was our priority,” Kay said. “Our firefighters responded quickly and did a great job fighting this fire. Brush fires can be unpredictable and very dangerous. The embers from the fire raised a concern for the safety of the nearby homes, many of which had wooden roof shingles. We were able to contain the fire and put it out.”
Kay said it took about two hours to fully extinguish the brush fire. He said fighting a brush fire requires special equipment that allows firemen to get into the brush.
“We have the equipment but firefighters from neighboring districts joined us with their equipment and we quickly got the fire under control and then extinguished,” Kay said.
Kay said that traffic was stopped on the busy street for about one hour because heavy smoked made it difficult to see.
Photos attached show the intensity of the fires in the prairie. (Photo credits OFPD. www.OrlandFire.org) 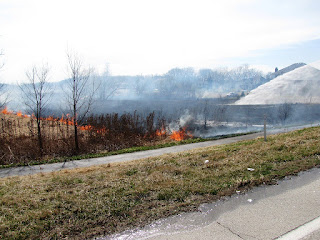 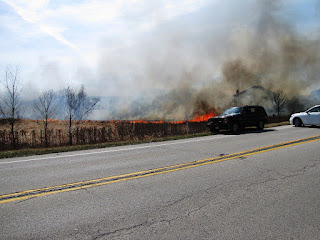 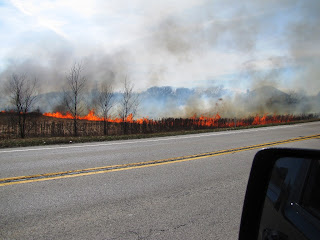 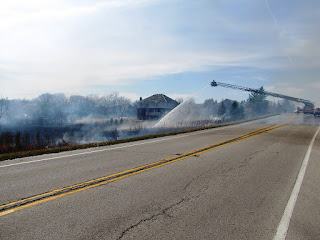 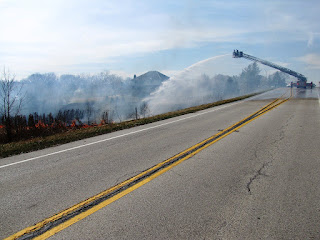 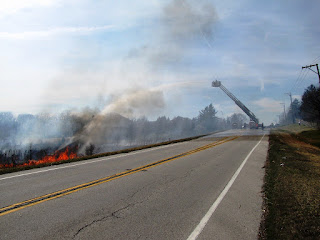 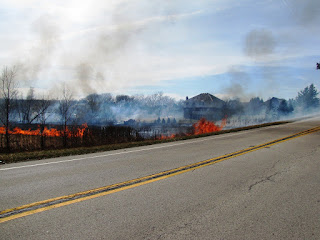 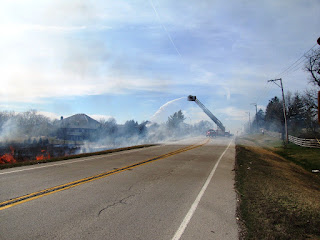 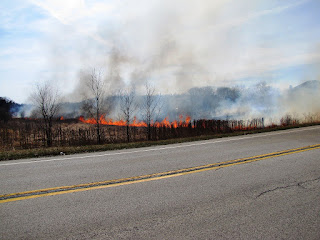 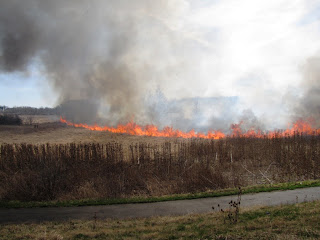 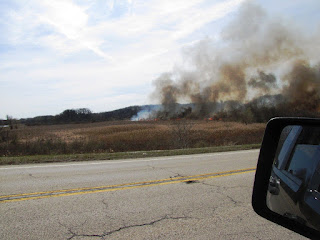 Fire fighters gather from around region at annual training sessions hosted by South Suburban Fire Investigation Task Force
Orland Fire Protection District hosts events
By Ray Hanania
Special to the Orland Fire Protection District
The Orland Fire Protection District played host to the South Suburban Fire Investigation Task Force which was founded by Orland Firefighters a decade ago to provide hands-on training to firefighters from across the state.
About 115 firefighters and students attended the 4th Annual SSFITF Workshops which was held at the OFPD Training Center at 163rd Place and 108th Avenue Monday March 5 through Friday March 9.
The five-day seminars and training exercises featured presentations by experts in the firefighting field as well as  trainers in specialty services from the ATF, FBI and regional police services.
“We live by the knowledge that in order to determine the cause of a fire, you have to find the origin of the fire. We spend a lot of time training to improve our skills,” said Bill Leddin, a lieutenant in the OFPD and the Task Force commander and founder.
“Our job is to fight fires and save lives. And we need to keep up with the most up-to-date techniques and hi-tech equipment in order to do that.”
Leddin said that training seminars began in one of the OFPD Fire Houses about four months after Sept. 11, 2001. It originally consisted of six fire departments including Alsip, Crestwood, East Joliet, Frankfort, Homer, and Orland, as well as two police agencies including Orland Hills and Palos Park police departments. 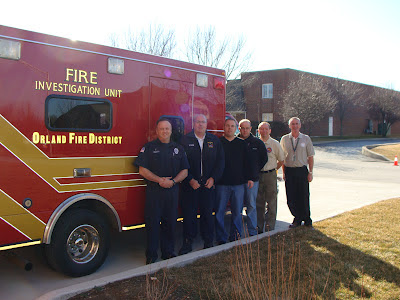 Leddin was appointed its Task Force commander a year later and continued to expand under his leadership to include support and training agencies such as ATF, Cook County States Attorney Arson Prosecution Unit as well as the Cook County Sheriff's Police.
“We didn’t start because of what happened on Sept. 11, 2001, but because we realized that fire fighting faced the same challenges, the failure of all the various agencies to share information,” Leddin said.
“We got everyone together and recognized that one major challenge we had was that no one was sharing information. We were really talking to each other. We didn’t start as a result of 9/11 but because of the same concerns that arose that day about the need to have all the available information we needed to fight fires, save lives and protect the people in our service districts.”
Leddin said that the effort began with the efforts of volunteers and in recent years they began to charge fire fighters a modest $75 registration fee to cover some of the costs.
“The Orland Fire Protection District provides the space and hosts the event but we cover everything as fire fighters ourselves,” Leddin said. Leddin said the fire fighters are dedicated to improving their skills and none were hesitant to invest their own money to participate.
Training sessions include speakers from the Cook County State’s Attorney’s office, specialists who are experienced in responding to car and vehicle fires, arson investigators with arson profiling, officials from ATF, the FBI and from the five MABAS divisions.
“We had the FBI here talking to us about things like cell phone training, record tracking and how to use technology to improve the work we do,” Leddin said.
The attendees come from 120 active fire departments around the Chicagoland region including from fire teams in Kankakee and Bolingbrook. Leddin said most of the attendees are fire and arson fire fighters who spend time building on their existing skills. They represent federal, state, county, municipal police and fire departments throughout the south suburbs. The Will County State’s Attorney’s office as well as the Will County Sheriff’s Department and the Cook County bomb squad are also all members of the task force.
“This is one of the most important events we can host to strengthen the knowledge and experience of our firefighters,” said Acting OFPD Chief Raymond Kay.
“They bring a lot of experience together and then help train and share experience and knowledge on how to do things better.”
Leddin said the needs of the various municipalities and fire districts vary.
“Orland investigates about 50 fires each year with about 15 arson investigations in the district’s MABAS divisions,” Leddin said. “In other communities, it may be more or it may be less. Oftentimes, fire districts ask the Task Force for assistance in not only fighting fire but investigating causes of fires.”
Last week’s 5-day event is held annually, but Leddin said the Task Force conducts monthly specialty sessions and help to provide the training that firefighters need to be certified and re-certified every four years by the State of Illinois.
“We provide that training so that the fire fighters receive the certification,” Leddin said.
Leddin said Task Force support requests follow specific criteria for “call outs” and include: Great Bodily Injury, significant or debilitating injury or fatalities involving firefighters, police or civilians; Multiple fatalities; Large Commercial Structures involving fire or explosion; Multiple working fires within the same jurisdiction or MABAS Division;  Large fire losses requiring additional investigators and equipment; Serial arsons occurring within a given jurisdiction or MABAS Division; and, Mutual Aid request from a non participating agency meeting the above criteria.
The call would be made to the Orland Central Dispatch at 708-349-3121.
“We’re here to help,” Leddin said. “We all share the same concerns and face the same challenges. Working together makes us more successful at doing our jobs and protecting our communities and citizens.”
END
Posted by Ray Hanania at 8:32 AM