On Dec. 18, 2012 at 9 am, the Orland Fire Protection District responded as a support unit with Truck 4 to a hostile structural fire in Oak Forest. Resources were taxed, a lot of black smoke emanated from the building there were a number of potential victims in the structure. Firefighters did a search in the basement where they found one civilian who came out. He was put him in an ambulance and as operations to fight the blaze were under way.

“It was an Unsafe, unstable environment,” said Fire Chief Ken Brucki at a meeting of the OFPD board on Jan. 22. “There was chaotic communications on the scene. Our people did an exceptional job. There was a dispatch employee who was off duty but in the district and he jumped in and started to do his work to help in the 9/11 center.”

During the Board meeting on Jan. 22, Brucki and Bat Chief Nick Cinquepalmi presented awards to the firefighters and personnel who supported the effort to get the fire under control. 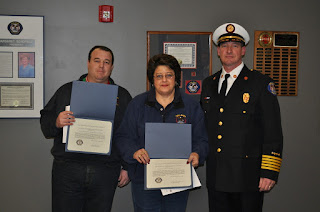 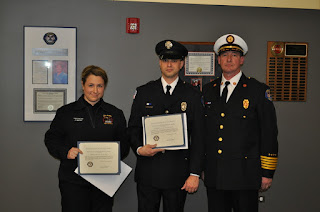 Individual commendations
Jennifer Smith, Firefighter and Jeff Ruchniewicz, Firefighter
“When a community member is in need, they call 911. When a community is in need, as a fire department, we also call 911 and the surrounding communities also come out and help. We sent two ambulances there, one to handle the victim and treated and transported him The second was sent there for any unknowns that might have come up," Brucki said. 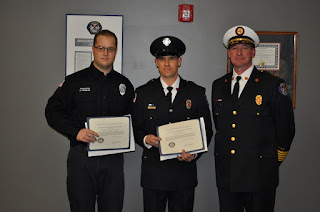 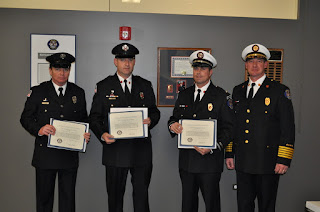 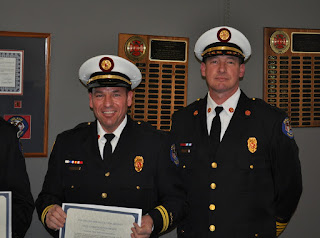 Bat. Chief Nick Cinquepalmi with Fire Marshal Ken Brucki also receiving an individual commendation award. “Battalion Chief Cinquepalmi monitored the circumstances as they happened. He knew there was going to be a call for service. Outstanding and excellent leadership showed through in this call.” 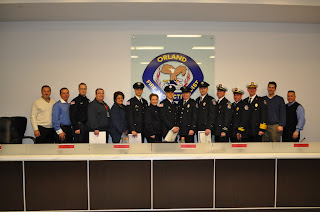 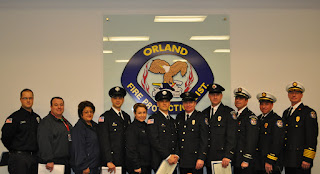 The new program will engage the public’s assistance by making AEDs more accessible for members of the public at locations including restaurants and businesses, and also make them available to local police.

OFPD Chief Ken Brucki said the program will be supervised by Battalion Chief Raymond Kay, who has already identified grant funding to help with CPR training and to help underwrite the purchase of equipment.  Battalion Chief Kay will also identify partners in the public who wish to help save lives by learning CPR and will host the AEDs.

“When we receive an emergency 911 call for a Cardiac incident, we immediately dispatch the closest unit by GPS location and another vehicle for support and assistance, one Ambulance and one fire suppression vehicle, both of which are equipped with Paramedics and Advanced life Support equipment. And while this happens very quickly and in a matter of one or two minutes, each passing second reduces the patient’s chances of survival,” Brucki said.

“What Community CARE will do is provide CPR and AED training that can be used at the scene by members of the public to provide emergency support while the ambulance and professional care is on its way giving the victim an extra few seconds that increase the patient’s chances of survival.” 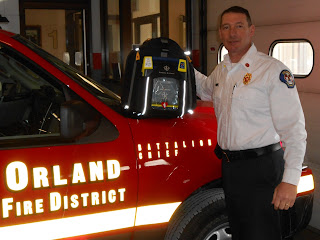 “The concept is simple. When someone experiences Sudden Cardiac Arrest at a public location, we want an AED unit to be available to help support immediate care until the emergency fire team arrives on the scene,” Kay said.

“Every minute that passes without CPR or defibrillation, the Sudden Cardiac Arrest victim looses a 10% chance to survive.  Those additional seconds and minutes of life support given to the patient while waiting for the ambulance to arrive will dramatically increase the victim’s survival.”

Kay said that the district does not have quality data on how many of the Sudden Cardiac Arrest patients returned to a normal life because all are taken to a hospital where medical treatment continues.  The Community CARE program helps to acquire this data which is instrumental in the constant desire to improve service.

“We know that more than 61 million Americans have cardiovascular disease, resulting in approximately 1 million deaths per year and one-third of these deaths are due to cardiac arrest, the sudden and unexpected loss of heart function. Survival rates for out-of-hospital cardiac arrest are only 1 to 5 percent,” Kay said.

“Most often cardiac arrest is due to chaotic beating of the heart (ventricular fibrillation), which can be restored to a normal rhythm if treated early with electric shock or ‘defibrillation’. Early defibrillation is a key component in sudden cardiac arrest patient survival.  Public access to Automatic External Defibrillators (AED) is imperative.”

Kay said that performing CPR and using the AEDs during those first few moments of a cardiac arrest can result in a survival rate of more than 90 percent.

“Over the next 16 years it is estimated that the 65 and older population will grow to over 30% of the population in Orland Park.”

“I want to first speak with business groups and community organizations and the police in Orland Park and Orland Hills and then get their support.” Kay said.

“The Orland Fire Protection District will always continue to explore ways to improve the services and public safety we provide to the residents,” Brucki said. “We can think of no better partner than members of the public to join us to help ensure a safe life for all of our residents.”

Early Friday morning just after 3 a.m., the Orland Fire Protection District responded to 135th and Partridge Lane for a motor vehicle crash. Initial units arrived to find a vehicle that had struck a tree on the South side of the street resulting in heavy damage to the car.

The driver of the single vehicle involved in the crash was pinned in what remained it after being split behind the front seat sending the engine up to neighboring homes. Additional Orland units were dispatched on a pin-in response to assist extricating the driver from the vehicle. The driver was removed from the wreckage in approximately twenty minutes from arrival and transported to Christ Hospital for treatment.

The cause of the crash is being investigated by the Orland Park Police Department. 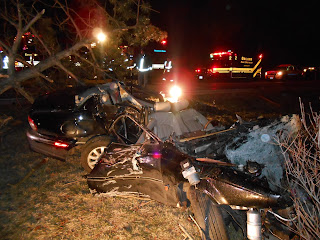