The Orland Fire Protection District presented longevity awards to four of its career firefighters during its regularly scheduled board meeting on Tuesday August 25, 2015.

The firefighters honored were Fire Engineer Jim Mazurkiewicz, Battalion Chief Joseph Moore, Lt. David Nagle, and Lt. Todd Schuneman. Each of the firefighters have served 20 years at the Fire District.

Interim Fire Chief Michael Schofield, acting in the absence of Fire Chief Ken Brucki who has taken a leave-of-absence, presented the awards during the board meeting.

"All of these professional firefighters have dedicated themselves to serving the people of the Fire District," Schofield said. "They are committed to providing life-saving emergency services in times of need."

Three other firefighters were unable to attend the meeting to receive their service awards including Engineer Larry Warszalek, who has served 25 years, Firefighter George Schick and Lt. Jerry Bohne who each served 20 years. 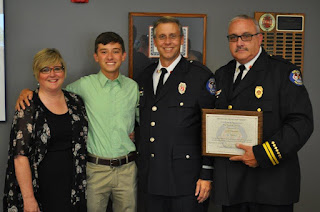 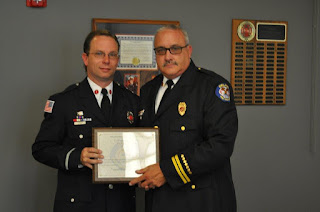 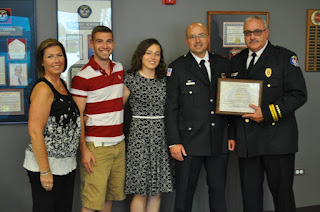 Engineer Jim Mazurkiewicz with his wife and children, and Interim Chief Michael Schofield 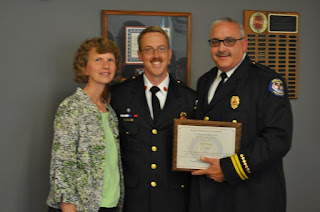