On April 10, 2013 a heavy thunderstorm moved through the Orland area. Fires were reported at homes and a barn: Cheswick Drive (home fire); a home on the 9000 Block of Fairway Drive; and a barn on a farm near Southwest Highway and Will-Cook Road (12000 Block of 179th) in Homer Township.

At 8:52 am, the Orland Fire Protection District was dispatched with a full response for a house struck by lightning on Cheswick Dr.

About two minutes later, another 9-1-1 was received reporting a house on fire in the 9000 block of Fairway Dr.

Dispatch was receiving confirming reports of a fire and upgraded the response to a working fire. The initial arriving engine was on scene in 4 minutes and reported fire showing from the roof.

As fire crews worked to extinguish the fire in the roof they used salvage covers below to protect the home and its furnishings from debris, smoke, and water. A hole was cut in the roof and siding removed to expose the burning area and extinguish. 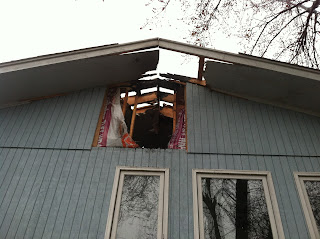 The fire was under control in about 10 minutes and fire damage was confined to the roof structure. There was light smoke damage inside but it was limited due to the quick actions of the firefighters on scene. 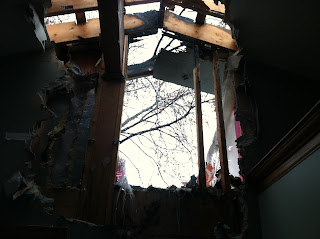 The cause of the fire was determined to be a lighting strike to the East roof. Orland Fire was assisted by Oak Forest, Tinley Park, and Palos fire companies on the scene. There was one person at home at the time of the fire, who escaped without injury.

The fire on Cheswick was also caused by a lightning strike and was confined to a wall space. Orland Fire crews opened the wall spaces to assure it had been extinguished. Damage was confined inside the wall. No injuries were reported on this incident either.

While fire crews were still on the scene at these two fires, a report of a barn on fire in the area of Southwest Highway and Will-Cook Road was reported.

The Fire District was able to respond quickly along with Mokena Fire and Palos Fire departments to the reported Barn Fire. 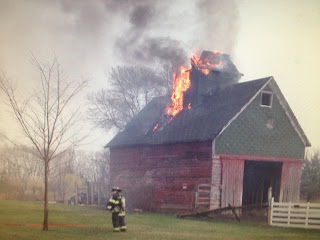 Orland Fire units arrived on the scene of the barn fire in the 12000 Block of 179th in Homer Township and found a barn on fire with two Oxen in a pen next to the barn.

Crews from Orland and Mokena quickly attacked the fire as the farmer moved the Oxen to a safe location.

Homer Fire was called for water tender since there are no fire hydrants in that area. The fire was quickly controlled with the barn suffering extensive damage to the roof, no livestock were injured, this fire; along with the other three appear to have been due to lightning strikes. 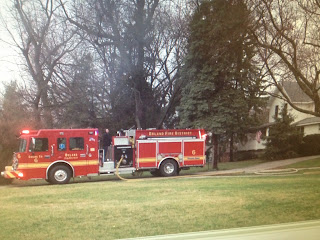