Chief Ken Brucki and the Orland Fire Protection District board presented awards at the meeting of the OFPD Board on Tuesday November 27. The following awards (with photos attached and captions) were presented.

On October 23rd a 48 year old male patron of the Riviera Country Club became unconscious in the Spa due to a medical condition. Recognizing the seriousness of the situation Riviera Country Club employees began a sequence of events that included calling 911, removing the unconscious patient from the water and beginning CPR. Paramedics continued care and because of the unselfish actions of the aforementioned employees the patron was successfully resuscitated. 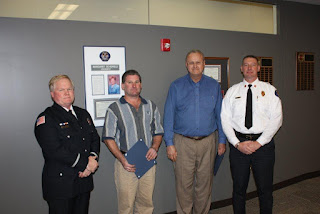 On September 3rd a 61 year old husband and father suffered sudden cardiac arrest in his home. The patients’ family began a series of life sustaining actions that included calling 911, following the direction of the Emergency Medical Dispatcher, initiating CPR and providing history to the paramedics upon arrival. Paramedics continued care on arrival and because of the prompt actions of Matthew & John Weimar, their father was successfully resuscitated. 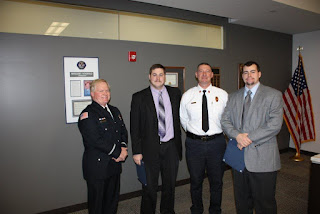 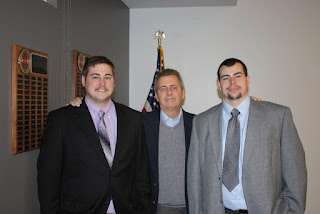 On October 27th Orland Police Sergeant Troy Siewert responded to an emergency at the Orland Bakery. On arrival Sergeant Siewert observed a woman unconscious on the floor, recognized the need for immediate action, quickly evaluated and began chest compressions.

Patient care was turned over to paramedics on arrival. The patient, whose airway was occluded, subsequently regained consciousness, was transported to the hospital for evaluation and recovered fully. The successful outcome can be attributed in part to the actions of Sergeant Siewert. 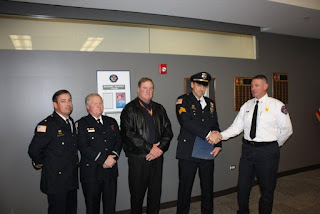 “Oftentimes we forget that firefighters and police work 24/7 and are constantly on-duty even when they are off of work,” said Brucki. “But we also recognize that many of our citizens have the training and experience to provide support until professional help can arrive. In all of these cases, the efforts of civilians contributed to positive outcomes. And we salute them all.”