The Orland Fire Protection District Tuesday honored Chicago Police Officer Sgt. Cindy Guerra for her role in saving the life of a 12-year-old boy from drowning during a backyard pool party in Orland Park.

Guerra, a 22 year Chicago Police veteran, said she was overwhelmed by the public response to what she was “something that comes naturally” to first responders such as police and fire fighters who are trained to save people’s lives.

Orland Fire Chief Michael Schofield present Guerra with the William Bonnar Life Saving Award, named after a longtime Orland Fire battalion chief who before joining the Orland Fire Protection District was a paramedic with the city of Chicago in the 1970s.

“We are very honored to have Chicago Police Sergeant Cindy Guerra here today, and especially Cortez whose life Cindy saved,” Schofield said in presenting the award to Sgt. Guerra.

“Firemen, policemen, or paramedics. When we are on duty or off duty, we are always ready to respond.”

Guerra thanked the board for the honor and the audience for attending the meeting, saying that she just acted out of training and instinct to help. She said she became a police officer after being inspired by seeing women fighting crime in the popular TV series Charley’s Angels.

“I thought it looked cool and decided that helping and protecting people is what I wanted to do,” said Guerra, who worked in the police department's Special Investigations Unit as a sergeant before transferring to the Office of News Affairs a few weeks before the accident. 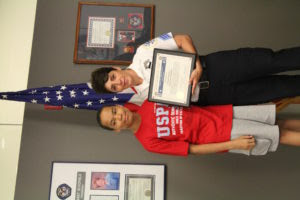 Cortez, the young boy who was involved in the pool incident, and Sgt. Cindy Guerra, who saved him using CPR

“You don’t do things to expect accolades or praise. You just do it. You act instinctively. To be recognized like this is overwhelming. I appreciate it and am so grateful.”
Guerra, worked as a police officer in a Chicagoland suburb before joining the Chicago police department, introduced Cortez.

“It wasn’t just me. Taylor [Cortez’s sister] came up and alerted an adult that Cortez was at the bottom of the pool,” Guerra recalled.

She said another police officer who was at the pool party celebrating a school graduation helped Cindy lift the boy out of the pool at a graduation party Saturday July 16, 2016 that was being held at Guerra’s cousin’s Orland Park home. Guerra gave the boy CPR, saving his life.

Cortez was with his mother, sister Taylor and relatives at the board meeting and said he was grateful to Sgt. Guerra for saving his life.

Schofield said it was important to remind the public that first responders like firefighters and police officers perform acts of heroism to save lives all the time.

The incident took special significance, Schofield said, in the wake of a series of violent attacks against police officers that has occurred across the country. 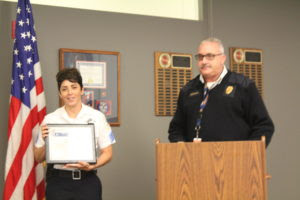