The swearing-in ceremony was held on Tuesday May 12, 2015 at the Orland Fire Protection District’s Training Facility, 10728 W. 163rd Place in Orland Park.

Fire Chief Ken Brucki said the 10 recruits have earned their positions in the OFPD, noting that they recently completed an intensive, year-long training program.

Leading the training for the OFPD are Lt. David Piper, the Training & Safety Officer, and Mike Seifert and Carl Jones, both firefighters and graduates of the district’s training academy program.

Brucki said new firefighter recruits are evaluated in a variety of fire and emergency simulations including fighting fires, rescue and equipment management. Every OFPD recruit must be professionally trained both as a firefighter and as a paramedic, he said.

“The recruits train 8 hours every day. Their day begins with a regimented exercise program to help eliminate injuries caused by muscle strains & sprains, which is one of the most frequent injuries firefighters experience,” Brucki said.

Training included a specific series of exercises. They included fighting a fire on the first floor of the Training Centers fire range. Teams of trainees, led by instructors, covered each of the key areas, connecting the hoses to the fire hydrant, scoping out the scene to identify any civilians in the building, and coordinating the response to the fire and smoke. One team approached to extinguish the fire, a second team climbed to the building’s roof to perform ventilation, while another scaled the building via ground ladders from the front to “rescue” several “victims.” 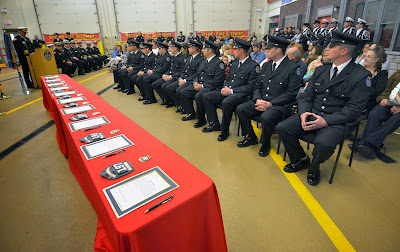 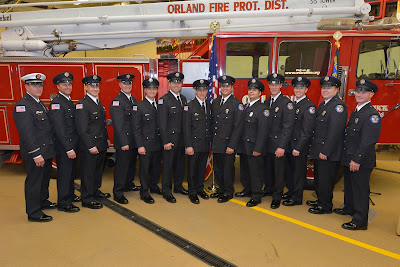 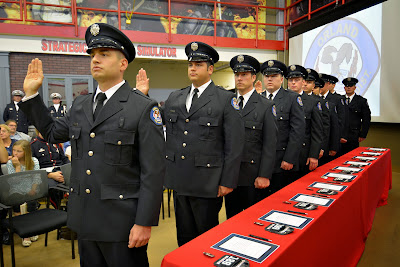 On hand for the ceremonies were officials of the OFPD District, board trustees including President Jim Hickey and trustees John Brudnak, Jayne Schirmacher, Chris Evoy and Blair Rhode, and members of the recruits' families.