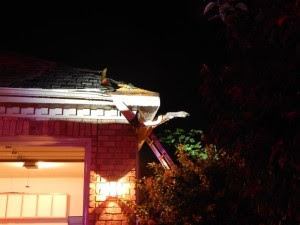 Fire caused by fireworks being investigated by Orland Park Police 11200 block of Poplar Creek Lane
Firefighters of the Orland Fire Protection District responded to a fire call at the 11200 block of Poplar Creek Lane on Friday night at around 9 pm, minutes before official government fireworks displays were set to begin in surrounding communities in celebration of the 4th of July.

It was among several fire calls that the OFPD responded to before and after the evening celebrations.

Neighbors noticed a fire on the roof of the home and immediately called 9-1-1. Firefighters arrived several minutes after reporting smoke and fire showing above the attached garage and cedar covered roof.

The fire was quickly extinguished by the first arriving units and was confined to the roof above the garage. Firefighters noted some smoke in the attics of the home but kept the fire from extending inside the living areas, limiting the damage. The cause of the fire was determined to be the use of fireworks by persons in the area.

The Orland Park Police Department detained a person for questioning.

“We constantly caution people about the dangers of fireworks being used by the public without professional supervision. They can injure people and they can cause fires. People watch as fireworks shoot up into the sky, and when done professionally, it is fun. But when it is done individually, the individuals forget that’s sometimes the fireworks can come back down and cause damage to property. Fortunately, this home fire, which we believe was caused by the use of fireworks, did not result in any injuries but it did cause what could have been a major fire that would have changed the lives of the people living in the home,” OFPD Chief Ken Brucki said.

“With the very large volume of amateur fireworks, we were fortunate not have any reported injuries.”

“This is another reason why we constantly urge the public to leave the fireworks to the professionals. They look beautiful when they are fired into the sky at night but no one thinks about the consequences of when the fireworks come down on property. You need professionals there to manage the fireworks and professional firefighters on standby to respond to any injuries or fires,” said OFPD Board President Jim Hickey.

Brucki said that the Orland Fire Protection District responded to other incidents of fires caused by fireworks that were in outdoor situations.

The Orland Fire Protection District also sent fire companies to assist in fighting a fire within the Northwest Homer Fire District. Brucki said the OFPD was on alert Friday night and will continue to be on alert through the weekend monitoring continued fireworks usage by the public.

All of the public-monitored fireworks displays were conducted without any incidents, officials said.