On Thursday July 12th, 2012 Orland Fire was notified of a grass fire in the area of 157th and Wolf. Companies were dispatched and while en route noted a column of smoke West of Wolf Rd. Initial crews were on the scene within 5 minutes locating the incident at 157th and 116th Ct. A large area of tall brush was burning with exposure to a home. Orland responded with two engines, a truck, an ambulance along chief officers. Orland was able to deploy its brush unit into the area that was burning to help control the spread and extinguish the fire. Assistance was received from Homer Fire’s brush unit along with a 2000 gallon water tender from Northwest Homer since there were no close hydrants to the scene. The cause of the fire is unknown but the extremely dry weather contributed to the spread. The fire was contained within 15 minutes and extinguished in about 45 minutes. There were no injuries and no property loss other than vegetation. 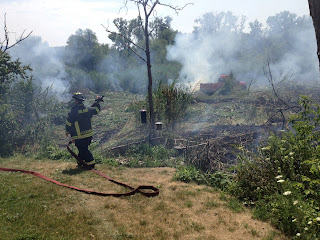 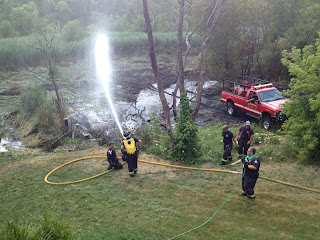 Five days earlier, on Saturday night July 7, 2012, the Orland Fire District received 911 calls at about 21:30 for a large brush fire in that area. Orland units arrived within 5 minutes for find a large area of what was swamp burning. The initial engine, brush unit, and chief were supplemented by additional Orland companies, including 2 engines, a truck, an ambulance and chief. Assistance was also requested from Northwest Homer for a water tender due to the distance of hydrants in the area off of 143rd. The fire was contained in about 45 minutes but crews remained on the scene for over 2 hours to extinguish hot spots. Over the next week, the Orland Fire District has responded to the same area numerous times for reoccurring hot spots. The area was determined to contain peat soil below the surface which due to the dry weather is no longer wet and susceptible to risk of burning. On Wednesday night fire department crews used thermal imaging cameras to identify the hot spots at the surface and marked them. The Orland Fire District had a crew on the scene both Thursday and Friday using a brush unit for several hours to concentrate on the hot spots that are appearing on the surface. These hot spots were detected to have a surface temperature of 500 degrees. There were no injuries reported and no property damage other than the vegetation on public land. Orland Fire is continuing to concentrate efforts on the hot spots to eliminate concern of the residents and reoccurring calls to the area for smoke.