A resident of Orland Park for the past 12 years, Brucki said his first priority will be to bring the focus of the district back to fire protection and safety, conducting an efficiency study that will become a benchmark to evaluate ways to reinforce and improve fire services.

“I am very honored and appreciative to be given this opportunity to represent one of the best fire districts in the country,” Brucki said. 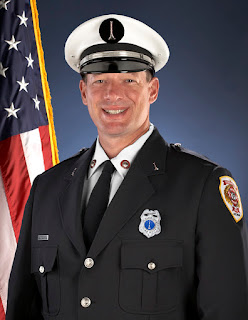 “I think the Orland Fire Protection District has so many dedicated firefighters and employees who I know want to focus their attentions, skills and professionalism on what they do best, providing the highest quality fire service and professional public safety for the people of the district. I am not here to focus on anything else. I recognize the great esteem that the district’s firefighters have for their uniforms and what their uniforms represent.”

Kay, who was one of three finalists for the position, welcomed Brucki as the district’s new chief.

“At the request of the Board, it was an honor to serve as Acting Fire Chief this past year,” Kay said.  “I am proud of the many accomplishments the administration was able to achieve during this transitional period.  I intend to work closely with the new Chief to ensure a seamless transfer of authority, succession.”

OFPD President Jim Hickey described Brucki as someone who has a deep commitment to professionalism.

“We received applications for several dozen very qualified individuals. Chief Kay was among those qualified candidates and it was not an easy choice,” Hickey said.

“We narrowed the field down to the top three candidates and in the end, the board felt that Ken Brucki has the experience, the skills and the leadership to help us move forward with the mandate that the public expects from us. That mandate is to provide the highest quality fire protection services and safety, and to do so with sensitivity for the challenges of today’s economy.” 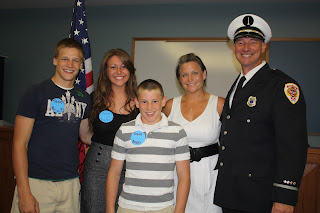 Brucki began his career as a volunteer firefighter in Merrionette Park in 1988. Later, he worked as a part-time firefighter in Darien-Woodridge before taking a fulltime position at Pleasantview. The OFPD board voted unanimously at its last board meeting May 22 to offer Brucki the job following the year long search for a permanent chief.

Brucki is a volunteer youth sports coach who has worked over the years with hundreds of young people in football and baseball leagues in Orland Park.

“I think the public will find Brucki to be a straight shooter, a no BS kind of person who will make fire service his number one priority,” Hickey said.

Brucki said, “I expect every member of the Orland Fire Protection District to set aside their personal interests and work together as a team to put the needs of the residents of our fire district at the forefront.”

The search for a permanent fire chief began last year in May when Kay, a 22 year fire veteran, was named acting chief to succeed Bryant Krizik.

“Chief Kay worked with the Board of Trustees, and with many other agencies including local school districts, police departments, villages, Cook County government, the State of Illinois and nationally with organizations such as the International Association of Fire Chiefs,” said Trustee Chris Evoy.

“Chief Kay’s experience in the Orland Fire Protection District made him the most qualified individual in the district to assume the position of acting chief. He worked in every firehouse and in various roles has been responsible for every division and operations in the district,” said Hickey.

“We appreciate the time he dedicated to this position to maintain the highest quality service of the Fire District.”