Orland Fire Protection District recognizes fast action by citizens and police officials
Actions helped save lives
The Orland Fire Protection District recognized five civilians and three members of the Orland Police Department for their quick actions that in each case helped to save lives and minimize the risk of danger.
OFPD Acting Chief Raymond Kay presented Certificates of Merit and Recognition to the eight recipients at District's regularly scheduled board meeting Tuesday July 26.
Seven of the recipients played key roles in helping respond to a fire that started in the attached garage of a home at Clearview and Terry Drive in Orland Park in the early morning hours following Fourth of July celebrations.
Kay presented certificates to Mohammad Rahman and to his two nephews, Nijem and Hatim Abderrhahman.
"Mohammed, Nijem and Hatim were driving by around 1 am returning from work when they saw the fire in the garage and immediately called 911 and pounded on the door to awaken the family," Kay said.
The family of seven, including four children, were fast asleep in the home. Kay said investigators could not determine an official cause for the fire.
Katherine Garrity was also recognized with a certificate for also calling 911 to report the fire.
And three members of the Orland Park Police who responded to the emergency with the Orland Fire Protection District firefighters were also honored. They are Officers Joseph  O'Brien, Christopher  Losurdo and Thelbert Heatherly.
In another incident, motorist Christine Binelli came upon an accident involving a motorcyclist on the ramp at I-80 and LaGrange Road, the day before on July 4th. The victim was in traumatic arrest and she immediately pulled over to provide CPR. Her efforts helped sustain the victim until he was transported by Orland and Mokena Fire District employees to the hospital.
"The message here is that the actions of individuals to stop and help can make a difference in emergencies like these and we want to thank them and encourage citizens to stop and help," Chief Raymond Kay said.
"It is so important for citizens to become involved and more importantly to be educated about basic lifesaving techniques and that was demonstrated in each of these cases."
Kay noted that the fast response and action from firefighters were critical in the outcomes.
"The firemen are there to do this job to save lives, respond to fires and emergencies. We're proud of the work we do and that the public expects from us. But we certainly appreciate the support that we get from a public educated about lifesaving techniques," Kay said. 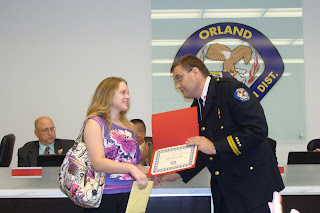 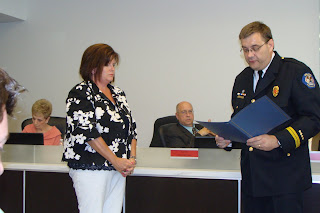